My best friend shifted to America two years back. I mentally prepared myself to “let her go” … perhaps, time and space would just drift us apart. But contrary to my expectation, in past 5 years of my life – everything changed – but my relationship with her; it only became stronger.
As I am thinking about this, I recieve a call from my 22 year old “adopted son” and we have a 2 hour discussion on ‘work and strategy’. He was an intern for the organization I work with and we shared a very formal relationship, until the day he left for the States for higher studies. Who would have thought we’d share a common ambition, ever after that?

And right now, I am making a farewell “gift” for one another close friend, who is migrating abroad. That sets me thinking about this post.

My friends are “far” closer, despite being far – because of this virtual opportunity. Because there are these things called – e-mail, facebook, skype and whatsapp and many other things that technology has gifted us.
And then I make another objective observation – I do have a great number of virtual friends. These are people you’ve  met in the not-very-regular manner and they’ve still become your friends. But how honest are virtual friendships?
Forever, we find ourselves debating on “How good is it?” Is it safe to be out in the open? Is it safe to reveal everything about yourself? Is it safe to accessible?

I remember a speech by the fantastic woman, Sheryl Sandberg. While talking of Facebook, she said something like – this is the era where people define their own identity. It’s no longer the clandestine chat rooms of the late 90s and early years of the 21st century, it’s now about the person behind the screen.

I relate to this feeling just like the guinea pig on the experiment table 😛 No.. seriously!
I mean… there was this time when I wasn’t even on Facebook. My work in Radio, demanded that I keep abreast with things around and hence, I made my facebook and twitter account. Twitter became more of use to me while I worked as a music journalist and gradually, I adopted the platforms to enter my life.

I remember the first time I put up a status, just some random thought, and I got some instant likes. I thought “Wow! Why should these people be bothered about what I write?” and many months later, in a discussion with my sister, she said, “well! May be your updates get attention because they are honest, have life and something for the reader.”

I hadn’t even realized it. (Of course, that’s my motto now, for this blog – The reader should have something in it – to take home!) But as I shed my inhibitions, and began to open up, I found great deal of people on the network responding to things I said or did.

My work further propelled me to reach out to a larger audience of people, and I found myself in an all new arena – it’s not just the shows I do anymore, it’s the people I come across and the friendships I’ve developed over the years.

And this is the turning point.

If you don’t have a cup of tea in your hand right now, then go make yourself one:D And then come back to read. [Also Like the page on facebook.com/alwaysovertea – because I LOVE to listen! You must connect.]

Now come back and I have some great perspectives to share:D

Now here it is: Two things as always.

Actually – 3. First and foremost – the awesome people, the people you love – your married sister, your mom and dad back home, your niece and nephews, your cousins – all those lovely people from your life – who aren’t exactly where you live; those people who mean the world to you but you as they say, you can’t have everything at the same time. So here – the phones, the internet, the emails and Facebook help us to live those relationships in an all new way. It’s lovely in a way (except when you have stalking relatives who form an opinion on everything you’re doing :p In that case, it’s a little tedious, I admit ;))

I am now going to share what I pride in – I have been able to find real people in the virtual world.

These are people who you’ve never met and yet, you connect. They connect through similar or dissimilar thoughts, the connect through the mind and the heart. And the strangest part is that, I feel a “universal” love for all of them! 😀

I mean.. who said it’s weird to love someone you’ve not met? Dude! On the other side of the screen, is a person just like you – A real person, with real feelings and real emotions. A person who is genuine, who shares your interest to converse and  that stranger is your friend.

And from that point of “universal” love, I am suddenly struck by the “What if?” question 😀
What if you find Love, romance virtually? What if you fall in love with someone you’ve not met?

I asked my friends the question, and they thought i was quite mad 😛

But think about it this way – do you remember the era in the past? the era that talked of rich love stories? The times when people lived far apart, waiting for spouses to return from war or work or travel – and STILL remained in love? That era that our grandparents knew of – loving someone in manner which did not necessarily require a physical presence 24*7 ….

The thought gave me shivers.
We know of awesome couples who’ve met through matrimonial ads in the papers, in just the past decade. Fast forward to today, matrimonial sites have brought people together. So now, that brings me to the question of – virtual love stories.

Is it then not possible to find true friendships and possibly, romances – virtually?
I try to weave a story in my mind – a virtual friend – an author, shared this concept of “55 fiction” where stories with a punch line are told in just 55 words. I try it.

She re-reads his letter a fifth time and then picks up the phone.
She sends him a text: “I think I am in Love …”
He answers with a question“…In Love with me?”
“No” She replies, “In love with the perception of You, that I have.”
He smiles. And she smiles. In their own worlds.

And as I revel in the awesome story I just weaved, I see this other friend online.
A friend I met on twitter, randomly discussing some random #Hashtag.
I say: Heya! How u!:):) Good?
And he replies: Like never before!

And somehow that livens up that second, so tremendously!

I have never talked to him, never met him, and have absolutely nothing in common (except that he writes just as

beautifully as the posts on Half a cup of Tea ;))
All I know is that – he’s a real person, with just about similar challenges as anyone in “our real world” would face, he writes the same exams, goes to the same college as many of our friends, he works in a company where your friend works …

There’s one more thing that’s playing on my mind as I write this post.

A few weeks ago, I had some differences with a virtual friend. We were so close, that I was almost working alongside him, despite the fact that we’ve never really met! Now, in the real world, I am sure I’d have been able to placate; but in virtual world? Virtual networks? How do you do that? That’s when I realized that that is one of the biggest limitations in the virtual world. It’s not just a battle between two people, it’s a battle between two people along with the delete button, power switch and disconnect option! 😛 You might just feel some relationships are so terribly real, some friendships so extraordinary…. but then….

And just as a ponder the questions of “How real I am”, I see  a beautiful e-mail from a woman who tells me, she loved my blogs. And we discuss life briefly. Over the weeks we exchange a few e-mails, and develop a friendship and there I realize, I am a real person in the virtual world as well!:) I am real!

Ah. Finally! So we all do find our own “identity” on the web!

Our generation is definitely going to know love and friendships like never before; there once was a time when people probably had to be silent not having found “like minded” people and times and stories, where people would actually NOT have found love, had they not come online (Shadi.com) for instance.
So yes … what we have today, is tremendous.

Besides the people I’ve mentioned above, there are so many other ways in which people touch our lives – and it’s not always the regular way of connecting! A person I met on the bus, went on to make it a point to be present for my first ever Play and got me a souvenir from Dubai! Or my friend’s girlfriend from another city, whom I’ve never met – yet, connect so instantly.

I am sure, you must be having such stories too!:) A friend’s friend, now your friend? A person who you met at a concert, ended up staying in touch? Someone who you met on the train, went on to become a crush? 😛

All I want to say is that, trust this space…. because on the other side is a real person and like I said, our generation is going to know friendships like never before! it’s Tremendous!

And the most important part of my “tremendous” experience is my best friend, whose birthday it happens to be today. (Umm no.. it doesn’t “happen to be today” – it is :p And I’m very thoughtfully posting it on the 7th of December  by USA times :p)

I could have written a post on how beautiful our relationship is, how she has seen me through everything in my life, how my whole life is in the e-mails we’ve exchanged, how time has made us stronger … and loads of personal stuff. But I din’t do that… because this post is not about telling you HOW special such a friendship is. It’s about coaxing you to look into your life and think of the awesome friends you have – And then you shall know HOW I feel about Anne.
And I shall now dedicate this post to her!

Just like they dedicate books? Novels? … well, here’s a blog-dedication! : ) 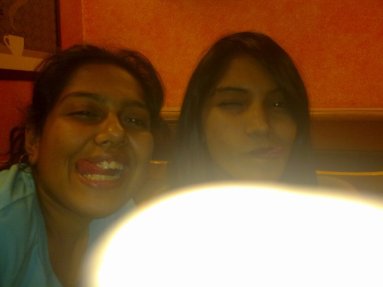 I’m going to close with saying – That friend……. Exists!

p.s. doesn’t matter when you read this blog, if you liked it, drop a comment. And, I’d feel super nice if you also wish Anne happy birthday.. Yay! Thanks! 😀

21 thoughts on “That Stranger is Your Friend – Virtual Relationships”

Trying to find an article? type in!